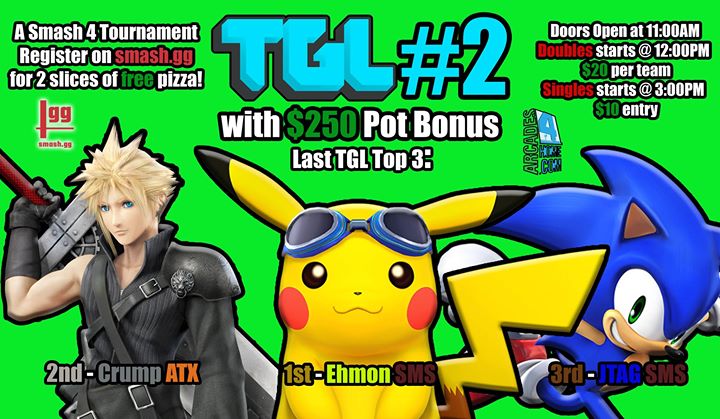 Texas Gamers Lounge is a new arcade in San Marcos that has all kinds of games to play! This event is going to be strictly Smash 4 all day with an entrant cap of 32 for doubles, and 128 for singles.

Those who register online also get 2 slices of pizza on the house, 3rd slice and so on will be $1 however. So Pre-register to get that special treatment!

Stream Stuff:
Stream link for TGL: https://go.twitch.tv/texasgamerslounge
Commentators are needed! So if you would like to commentate, please let me, Ammon, Eddie, Erick, or Imran know ASAP!

Double Elimination Bracket
2 stock, 6 minutes
Customs moves are BANNED
Best 2 out of 3, (WF, LF, GF being best 3 out of 5)

Set Ups:
TV, Wii U, GameCube adapter, all characters & DLC unlocked, and of course a copy of SSB4 = full setup. Set ups will be needed, and like I said, first 15 dedicated set ups will have venue waived!

Stage Striking:
Legal stages are split into two categories: “starter” and “counter-pick” stages. “Striking” a stage means a player eliminates a stage he/she does not want to play on. To make this easy, I will lay out the order of events of a set:
1) Players choose their characters (This is a double-blind pick.)
2) Players randomly determine who will “stage strike” first (play rock-paper-scissors or flip a coin)
3) Stage striking — out of the 5 “starter” stages, the first player strikes 1 stage, the 2nd player strikes 2 stages, and then the first player strikes 1 more stage; the last stage standing will be where you play. So the striking order is 1-2-1.
4) After the match is played, the winner chooses 1 stage to strike out of all the “starter” and “counter” stages. The loser then chooses a stage out of the remaining stages*
5) After a stage is chosen, the winner of the last match chooses his/her character first, then the loser chooses their character.
6) After this match is played and if there are matches remaining in this set, then repeat steps 4-6
*Also banning Battlefield, means banning Dreamland!*

1. Dave’s Stupid Rule: You cannot counterpick a stage you already won on during a set. Unless both players agree to the stage pick (see rule 4)

2. Mii fighters are allowed but must use the default 1111 set

3. For the first round of a set, a player may opt for a double blind pick. (See Stage Striking Rules for details).

4. Any stage can be played on provided both players agree to it.

5. All DLC characters are legal.

6. Pausing during a match is not allowed. The player that initiated the pause is subject to losing a stock provided their opponent cares enough to bring the rule up.